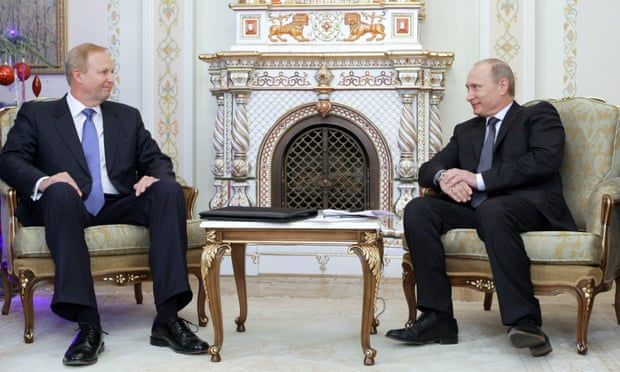 Oil firm holds 22% stake in Rosneft, run by Putin’s de facto deputy, and made $2.7bn profit from arrangement last year
BP has been warned of government “concern” about its involvement in Russia, in a telephone call between business secretary Kwasi Kwarteng and the oil company’s boss Bernard Looney on Friday.

Kwarteng is understood to have spoken to Looney in the light of Vladimir Putin’s invasion of Ukraine, which has increased scrutiny on British business ties to the Kremlin and led to sanctions against Russian firms.

Speaking after the call, a Whitehall source said: “BP left the meeting with no doubt about the strength of the business secretary’s concern about their commercial interest in Russia.”

Kwarteng is believed to be uneasy about BP’s 22% stake in Rosneft, the Russian state oil firm, particularly given its role in providing fuel for the military effort in Ukraine.

The British oil “supermajor” has been deeply entwined with Russia for years and holds two seats on the 11-strong board of the company.

Rosneft is run by Vladimir Putin’s de facto deputy, Igor Sechin, who has been nicknamed Darth Vader due to his fearsome power.

The two firms operate a “strategic partnership” that sees them cooperate on research, as well as on oil and gas projects such as Taas-Yuryakh in Eastern Siberia.

The arrangement is the legacy of a $55bn deal in 2013 that saw the Moscow-based firm take over BP’s joint venture, TNK-BP. In BP’s most recent set of annual results the state oil company contributed $2.7bn in underlying profit to BP’s bottom line last year, up from just $56m the year before, or just over 21% of its bumper $12.8bn profit for the year.

Sources familiar with the situation said Looney and Kwarteng discussed BP’s extensive Russian interests during a call on Friday.

While the UK has imposed a range of sanctions on Russian businesses, including the airline Aeroflot and banks Sberbank and VTB, partnerships involving BP and its UK rival Shell have been unaffected.

BP boss Bernard Looney and his predecessor, Bob Dudley, both sit on the board of Rosneft, which is chaired by former German chancellor Gerhard Schröder.

The relationship has long been mired in controversy: when he was boss of TNK, Dudley fled Russia in 2008 amid fears over his safety and what was described by BP as an “orchestrated campaign of harassment”.

BP has already been under fire for soaring profits and dividends amid an intensifying cost of living crisis, as well as pressure to slash emissions and move away from oil and gas exploration.

BP declined to comment on discussions with the government.