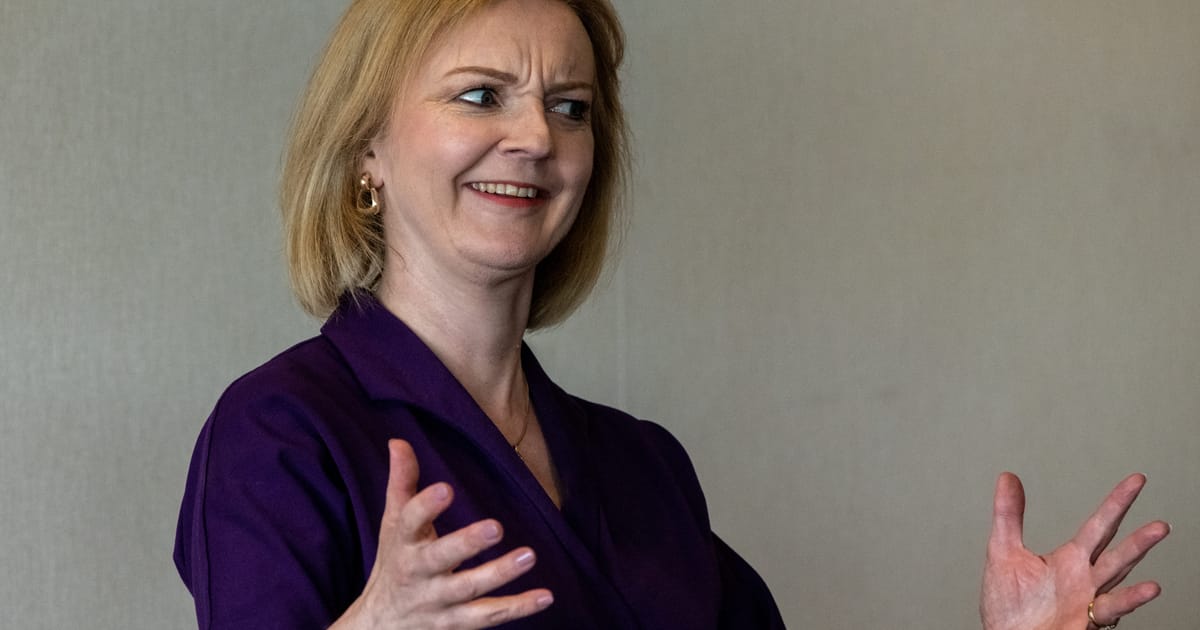 ‘Beaten by a lettuce’: 44 glorious days of Liz Truss

Charting the fall and fall of the UK’s latest prime minister, aided by a livestream of a vegetable.

Westminster is in turmoil, the U.K. economy is floundering, and Tory MPs are about to pick their fifth prime minister in just over six years.

But in a sign of total normality in this fully-functioning Western democracy, Brits have instead spent much of the past week fixated on a livestream of a head of iceberg lettuce, wearing a wig.

Set up by tabloid the Daily Star, the paper’s newshounds bet big that a 60p supermarket lettuce would outlast Prime Minister Liz Truss, after her fledgling regime was gripped by unprecedented chaos in its first few weeks.

And they were right. Truss finally resigned Thursday, just 44 days into the job, making her the U.K.’s shortest-serving prime minister. The Daily Star broke out the Champagne, declaring: “The Lettuce Outlasted Liz Truss.”

So how did Truss put her salad days behind her, and why did she wilt under the public gaze?

Let POLITICO take you on a whirlwind tour of Truss’ 44-day premiership — but be warned, there are more than a few icebergs ahead.

September 6: It all started so well. After seeing off suave-but-dull rival Rishi Sunak in a rancorous Conservative leadership contest, Truss looked triumphant as she took the reins at No. 10 Downing Street and vowed to “transform Britain into an aspiration nation.” She had good reason to be cheerful, too, vacuuming up support from thousands of grassroots Tory members, getting the key Conservative-backing newspapers on side, and confidently brushing off the fact that the majority of her own Tory MPs had doubts about her competence. What did they know, after all? They’d only worked with Truss in Westminster for the past decade.

September 8: Upon taking office, Truss picked her close friend and neighbor Kwasi Kwarteng as her top finance minister, and immediately tasked him with taking on the stale “orthodoxy” at the Treasury. In a savvy first move, Kwarteng immediately sacked the most senior civil servant in the ministry — a man so clever his name is literally Tom Scholar — and so ensured that outmoded, orthodox qualities like “experience,” “credibility” and “economic literacy” were expunged at just the right time … amid a global economic crisis.

Also September 8: A busy day this one, what with Britain’s longest-reigning monarch dying that same afternoon. As the country mourned Queen Elizabeth II, Truss faced her first big communications test on the job: How to capture the nation’s deep sense of grief? She duly rose to the occasion, ripping up lines painstakingly prepared by career officials to deliver a heartfelt tribute with all the enthusiasm of a Q4 sales report. The country wept, for at least one Liz.

September 23: The queen’s death put normal politics on ice for a couple of weeks. But the pause allowed Team Truss to put the finishing touches on their very own Mona Lisa: the mini-budget. A sleeker, more aerodynamic budget than the normal kind, this mini version did away with tired conventions like “independent fiscal scrutiny by the government’s own watchdog,” and “making the sums add up.” Instead, Truss and Kwarteng pressed ahead with debt-funded tax cuts and a multi-billion pound plan to subsidize energy bills. Kwarteng also showed he retained a populist touch with crowd-pleasing measures such as cutting taxes for the U.K.’s super-rich and removing a cap on bankers’ bonuses, all in the middle of a cost-of-living crisis — before heading off to a Champagne reception with hedge fund bosses to party the night away. Cheers!

September 26: Eek. Then came the backlash. Financial markets — famously stuffed with tofu-munching lefties who hate conservatism and everything it stands for — failed to understand the mini-budget’s genius, while the unruly pound, which probably voted to Remain in the EU, crashed to its lowest-ever level against the U.S. dollar. Kwarteng, sounding a little shaken, promised he would publish all his fully-worked-out sums in, oooh, November? That sound OK?

September 28: The pound’s reign of terror continued, and, as U.K. borrowing costs soared and British pension funds teetered on the brink of collapse, those radical communists at the Bank of England were forced to step in with an unprecedented emergency bond-buying program “to restore market functioning.” Their hippie best mates at the International Monetary Fund also got in on the act, saying Kwarteng’s plans would “likely increase inequality” and urging the government to “re-evaluate” its tax measures. Chill out, guys! 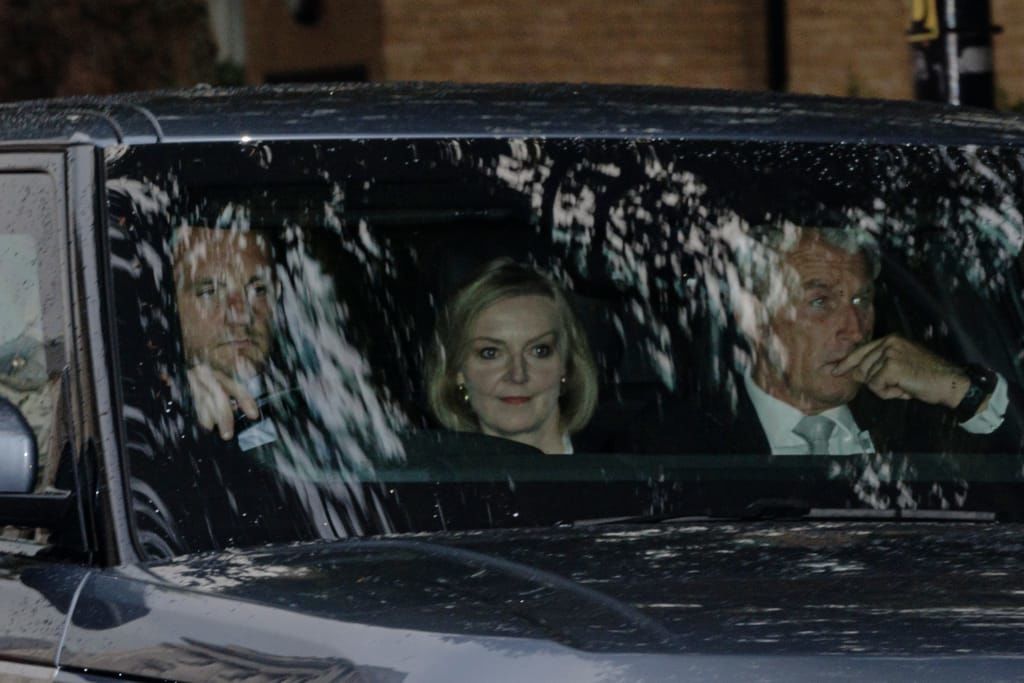 October 3: Phew — she made it through to the Tory party conference. Political party conferences, after all, are normally a glorious victory lap for newly-crowned leaders, but Truss again decided to smash the status quo by turning hers into a deeply embarrassing few days of U-turns, backpedaling and noisy Tory infighting. Less than 24 hours after insisting she was sticking by her economic plan, Truss suddenly junked her centerpiece proposal to cut taxes for the rich. Kwarteng admitted the idea had “become a distraction” from the government’s “overriding mission.”

October 4: Indeed, the U-turn allowed the real “overriding mission” of the government — to needlessly piss off its own MPs — to shine through. No sooner had the tax cut been ditched than Truss’ ever-loyal Cabinet ministers were onto their next target, publicly pressuring the PM not to impose a real-terms cut to social security payments. One minister even capped off the day by telling a room full of drunk communications professionals that the government’s own comms strategy was “shit.” And who could argue?

October 10-11: A week after ditching their flagship policy, Truss’ government had another go at calming the still-spooked markets. Kwarteng’s new idea? Bringing forward the publication of his next fiscal plan to a date in no way guaranteed to be, erm, spooky: October 31. The Bank of England loved the cut of his jib, again stepping in with a major market intervention to prevent what it called a “fire sale” of U.K. government bonds. Which sounded worrying.

Actually, we really love the orthodoxy, please come back

October 14: After weeks of economic turmoil, Kwarteng was dragged home from a trip to Washington D.C. so that he could be sacked on the spot while still jet-lagged — a bad day at the office by anyone’s standards. Finally free of a chancellor who had repeatedly defied her by *checks notes* implementing her exact policy wishes to the letter, the PM then ripped up her long-standing pledge to ease taxes on big business, admitting in an epic eight-minute-long press conference that she’d gone “further and faster than markets were expecting.” We’ve all been there. Reaching out to the center of the Tory party, Truss appointed former Health Secretary Jeremy Hunt as her new chancellor, shoring up her faltering premiership for a full 36 hours.

October 16: Team Truss’ strenuous efforts to build bridges with her now-mutinous party ramped up another notch over the weekend, as a No. 10 insider branded her former leadership rival and ex-Cabinet colleague Sajid Javid — who had reportedly just been sounded out by Truss’ team itself about the chancellor job — “shit.” It didn’t go down too well with him, or his mates.

October 17: A biggie, as Hunt put a bullet in the entire Truss agenda, live on TV. In an astonishing move, the new finance minister issued a televised statement in which — by his own admission — he ripped up “almost all” the mini-budget pledges the Truss government had announced just a few weeks earlier. Even the energy support plan, clung to by Truss supporters as one of the few remaining positives of her premiership, was to be significantly pared back — although hard-pressed voters should be able to warm themselves this winter by standing near the giant “dumpster fire” that’s been Westminster the past six years. Truss capped another glorious day by avoiding an urgent question in the House of Commons and sending a junior Cabinet minister to reassure angry MPs that the British prime minister was not, in fact, “hiding under a desk.”

October 19: Very much the End Times. A rollercoaster of a day — if rollercoasters only went downhill — as an under-pressure Truss first offered up yet another U-turn, this time on pension payments; then a senior Truss aide was suspended as that clever “shit” quote to the Sunday newspapers got investigated by No. 10; then her home secretary was sacked and posted what was essentially an extended anti-Truss sub-tweet as a resignation letter; and then the government somehow turned a really boring House of Commons vote into a bitter row about “manhandling” its own MPs, as one of them literally cried on live TV. For those watching from abroad — this is why people in the U.K. drink a lot.

October 20: With the game finally up and her authority shot to pieces, Truss bowed to the inevitable and resigned Thursday, reeling off all her achievements in an 89-second statement on the Downing Street steps. Yet all is not lost. Tucked away in a newsroom in London, there’s one little lettuce who never lost hope. And in its still-crisp and delicious center lies the promise of national renewal. We can but dream.