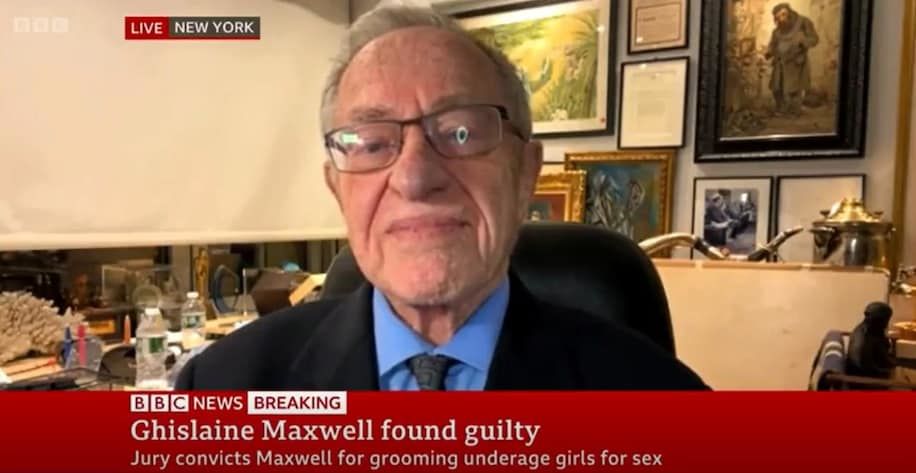 Alan Dershowitz appeared on the BBC to talk about the conviction of Ghislaine Maxwell, despite also been accused of sexual crimes by Virginia Giuffre, who also claims she was abused by Epstein, Maxwell and the Duke of York. The 83-year-old and the Duke vehemently deny any wrongdoing and have not been charged with any crime.
The interview on the BBC News Channel, as the news of Maxwell’s conviction for trafficking teenagers broke, introduced him as “constitutional lawyer” but made no reference to his links to those involved in the case.

He used the airtime to denigrate Ms Giuffre’s claims against himself and the Duke.

Shortly after Maxwell was convicted Wednesday of sex-trafficking charges for assisting Epstein in abusing young girls, BBC News brought on Dershowitz to analyze the guilty verdict of Epstein’s longtime paramour. But the network failed to mention that Dershowitz not only previously served as Epstein’s attorney but that he is accused of having sex with Virginia Roberts Giuffre when she was as young as 16. Dershowitz has denied the allegations.

Dershowitz used his time on the “BBC World News” to slam Giuffre for supposedly not being a credible witness in the Maxwell case — claims that went unchallenged by the show’s anchor. He also claimed the case from Giuffre against him and Britain’s Prince Andrew, who has also been accused of sexual assault and has denied the allegations, was somehow weakened after Maxwell’s guilty verdict.

“The government did not use as a witness the woman who accused Prince Andrew, who accused me, accused many other people because the government didn’t believe she was telling the truth,” he said. “In fact she, Virginia Giuffre, was mentioned in the trial as somebody who brought young people to Epstein for him to abuse. And so this case does nothing at all to strengthen in any way the case against Prince Andrew.”

The appearance was denounced on social media by public officials and legal experts as “totally inexcusable,” with many calling on the BBC to explain why Dershowitz came on air. Dershowitz also appeared on Fox News on Wednesday, but that network specified his connection to the case.

“Fox News at least acknowledged Dershowitz’s connections with Epstein,” wrote journalist Aaron Rupar. “Unfathomable that the BBC thought this was a good idea.”

The network announced Thursday that it was investigating why Dershowitz appeared without noting he was implicated in the case.

“Last night’s interview with Alan Dershowitz after the Ghislaine Maxwell verdict did not meet the BBC’s editorial standards, as Mr Dershowitz was not a suitable person to interview as an impartial analyst, and we did not make that background clear to our audience,” the network said in a statement posted to Twitter. “We will look into how this happened.”

A spokesperson with the broadcaster told The Washington Post that the BBC has “nothing further to add at this time.”

Dershowitz told The Post in a statement that he “made full disclosure of Virginia Guffre’s false accusation against me before expressing my opinion about the prosecution’s wise decision not to vouch for her credibility by using her as a witness in the Maxwell case.” (The statement misspells Giuffre’s name.)

“The media has repeatedly interviewed alleged victims of Epstein and Maxwell regarding the Maxwell case,” he said in the statement. “It is entirely appropriate for the media to interview a victim of Guffre’s perjury as long as there is full disclosure and [no] one is misled.”

Attorneys for Giuffre did not immediately respond to a request for comment early Thursday.

The news comes at the end of a trial focused on what types of enabling conduct — including befriending young girls and teaching and scheduling them to massage an older man — should be considered criminal. Maxwell, 60, was accused of recruiting teenage girls to massage Epstein at his homes in Palm Beach, Fla., New York, New Mexico and elsewhere between 1994 and 2004.

Epstein allegedly paid the girls hundreds of dollars in cash for the massages, which involved sexual touching and which he expected three times a day. He died by suicide in August 2019, while awaiting his own trial.

Maxwell faces up to 65 years in prison. No sentencing date has been set.

Giuffre has said that Epstein and Maxwell forced her to have sex with public figures, such as Dershowitz. She asserted to the Miami Herald and the New Yorker that she had sex with Dershowitz at least six times in Epstein’s various residences. In denying her claims, Dershowitz, who represented Epstein and helped negotiate a lenient non-prosecution agreement for his client in 2008, called Giuffre a “prostitute” and a “bad mother” to her children.

Giuffre sued Dershowitz for defamation in 2019. He countersued Giuffre, claiming she had made false claims about him so that she could extort money from a member of Epstein’s inner circle.

On the BBC, Dershowitz, who was introduced solely as a “constitutional lawyer,” mentioned the accusation himself when he said that Giuffre had falsely implicated him. He applauded the prosecution for not calling Giuffre to the stand for Maxwell’s trial.

“They deliberately didn’t use the main witness, the woman who started the whole investigation, Virginia Giuffre, because ultimately they didn’t believe she was telling the truth,” he said. “They didn’t believe that a jury would believe her and they were right in doing so. So it was very smart on the part of the government.”

On Fox News, host Pete Hegseth told viewers that the lawyer had connections to people close to the case. Dershowitz went on to suggest, without evidence, that Giuffre could be guilty of sex crimes.

“Yes, there are victims, but there are also perpetrators. And some of the people could be both victims and perpetrators,” he told Fox. “Giuffre could be a victim at one point, but then she became a perpetrator and a perjurer at another point.”

But what one critic called the “utterly bizarre” appearance on BBC received most of the attention.

“Huge error by the BBC,” wrote Adam Wagner, a human rights barrister. “All the BBC had to do was Google him.”

British member of Parliament Nadia Whittome said that by having Dershowitz on to talk about the verdict, the BBC was “trying to silence victims following Ghislaine Maxwell’s conviction.”

“I can’t believe this needs to be said but the BBC should not give a platform to people accused of child sexual abuse,” she tweeted. “We have a responsibility to believe people when they disclose sexual abuse and to create conditions in which they can in the first place. All details of Epstein’s network should be published and all victims/survivors are owed justice. This is clearly the tip of the iceberg.”