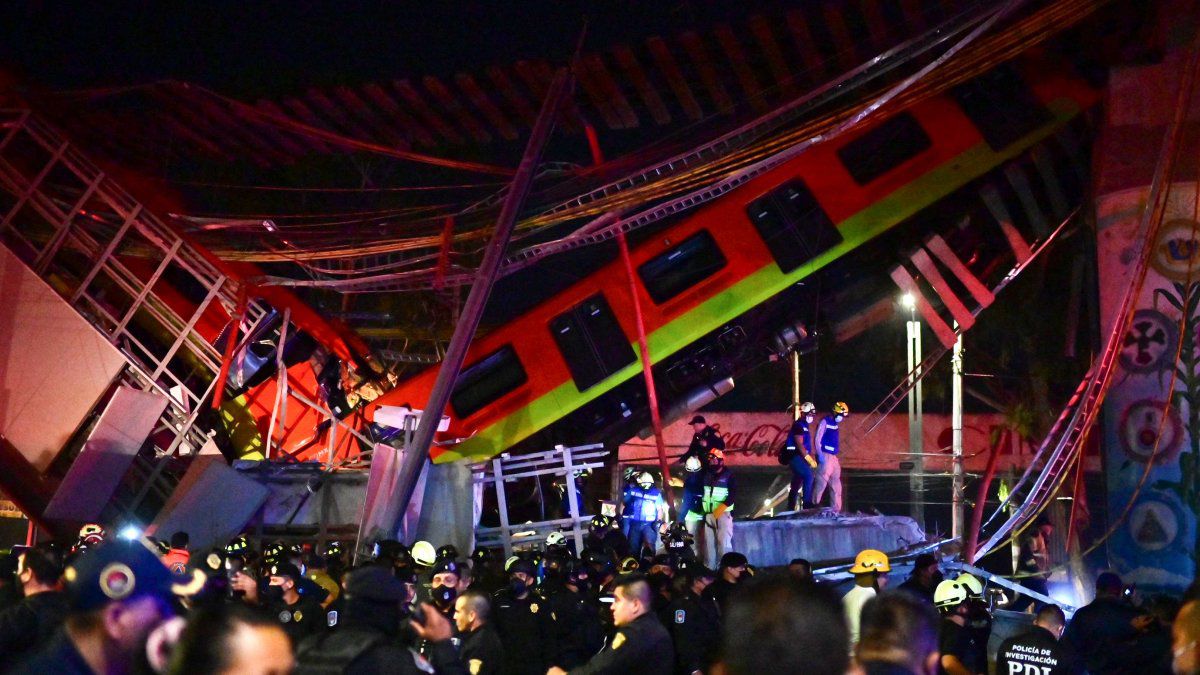 Among the victims of the Mexico City subway accident are minors, said Mayor Claudia Sheinbaum.
At least 23 people died and 70 were injured Monday night when a Mexico City subway train fell from a bridge that collapsed, authorities said.

"Unfortunately there are 23 dead, one of them in a hospital," the mayor of the capital of Mexico, Claudia Sheinbaum, who had previously reported 20 deaths in this incident, told reporters on Tuesday.

Among the victims of the subway accident are minors, said Sheinbaum earlier, who also reported "seven seriously injured."

A total of 65 people receive care in hospitals and a few others had minor injuries and did not need medical attention, added the mayor at the command post installed at the site of the tragedy, where part of the train could be seen hanging from the bridge of about 12 meters Tall.

At the scene, a man was waiting for news of his brother, who according to him was trapped in a wagon.

"He came with his wife and they managed to get her out, but he was crushed there and the truth is that since we don't know anything, they don't give us reports. For them to get him out, who knows how long (it will take)," he told AFP.

Sheinbaum indicated that the accident occurred when a beam of the viaduct expired at the Olivos station, around 10:00 p.m. local time (03:00 GMT).

Dozens of rescuers and firefighters from Mexico evacuated the passengers, amid twisted iron and cables, according to local television images.

Given the weakening of the train, the work had to be suspended, but then it was resumed with the help of a crane.

Several wounded evacuated on their own, Sheinbaum said.

- "This construction is wrong" -

Ricardo de la Torre, a neighbor of the sector, commented to AFP that the passage of the train usually produces a strong vibration in the houses.

"Really in the mornings, when the trains begin to activate, to have their service, in the houses you feel. By that simple fact we know that this construction is wrong," he said.

Some injured from the train accident wore neck braces and were transported by ambulances, amid shouts and the noise of sirens.

Investigators from the Mexican Prosecutor's Office came to identify the bodies and carry out expert reports aimed at establishing the causes of the accident.

"The truth and justice will be reached," Sheinbaum guaranteed.

A person emerged alive from a car that was trapped under the rubble of the overpass, the mayor said.

The police, who came with rescue dogs, continually urged onlookers to retreat to avoid accidents due to falling debris.

"Suddenly I saw that the structure was shaking. It was not even a minute after the subway fell and a lot of dust began to rise," an unidentified witness told the local television network Televisa.

"When the dust cleared we ran to see if we could help. There was no screaming, I don't know if they were in shock (...), some people managed to get in and took out about two people who were on top. The others were stacked," he added.

The area of ​​the train accident was cordoned off by policemen and soldiers from the National Guard to facilitate the dismantling of the wagons with thick chains.

José Martínez, a worker who usually takes the train to Tláhuac, excitedly told the press that he was saved from the accident because he did not get to board after leaving work.

"I was saved for like 15 minutes. It's good that nothing happened to me!" He said.

This is the second accident that has been registered in the subway so far this year.

Last January, a fire in the control facilities left one person dead and 29 intoxicated.

Meanwhile, in March 2020 two trains collided inside a station, leaving one dead and 41 injured.

The Mexico City metro , inaugurated in 1969, is one of the main means of transportation in the capital and its metropolitan area, where some 20 million people live.

Line 12, on which Monday's accident happened, was inaugurated on October 30, 2012 by the current chancellor of Mexico and then mayor of the capital, Marcelo Ebrard.

After lamenting this "terrible tragedy", Ebrard offered his collaboration to determine "responsibilities".

"I reiterate myself at the entire disposal of the authorities to contribute in whatever is necessary," he wrote on Twitter.