Two singles released from Abba’s first album in 40 years have raced to the top of the streaming charts, in a comeback that has generated praise and excitement among fans who remember the original releases and a new younger audience.

The first two singles from Abba’s forthcoming album, to be released on 5 November, were in first and third place on YouTube’s trending rankings in 12 countries on Friday, including the UK. I Still Have Faith In You gained 4.4m views within 24 hours in Britain and Don’t Shut Me Down 1.4m views.

In a further confirmation of the Scandinavian pop band’s cross-generational appeal, Abba have already amassed 991,000 followers and 5.5m likes on TikTok despite only joining the platform on 1 September.

The group, who made a piano rendition of Dancing Queen that received 7.3m views their first post, have spawned a huge number of videos from generation Z fans lip-syncing to songs or parodying scenes from the film Mamma Mia.

While Spotify has not updated its charts since the release of the singles, it shared data showing the band were most streamed by 18- to 24-year-olds, and that their music has been growing in popularity since 2014, with streams doubling over that period. Dancing Queen is the most popular track on the platform, the data showed. 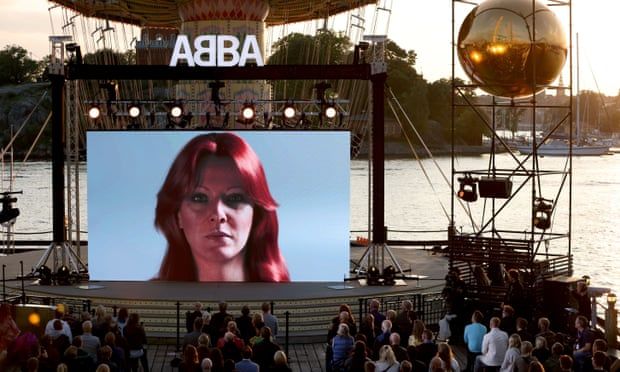 Although Abba, who released all their earlier hits between 1972 and 1982, are now seen as one of the most successful of all time, their popularity dipped in the late 1980s and early 1990s, when they were increasingly seen as kitsch.

It was not long before the Swedish quartet returned to chart-topping fame, however, with the launch of the Abba Gold: Greatest Hits compilation in 1992, which is still one of the bestselling albums ever worldwide. This was followed by the popular Mamma Mia musical on stage in 1999 and two successful film adaptations starring Meryl Streep, Pierce Brosnan, Dominic Cooper and Amanda Seyfried, in 2008 and 2018.

Fans of all ages have been delighted by the return of the pop legends. Gary Collins, who edits the magazine for Abba’s official international fanclub, said they had been “absolutely overwhelmed” by news of the 10-track album. “It’s so much more than people dared to hope for from a band that hadn’t recorded for so long. I think it’s amazing they would come back.”

In particular, fans appreciate how Abba have sought to recapture the timeless appeal of their original sound, he said. “It sounds like they never went away. These songs in 2021 could easily have fitted on to one of their last two studio albums in 1980 and 1982.”

Collins said he was unsurprised Abba’s music was so popular among teens as they have always had cross-generational appeal, and also their glam rock-era flamboyance and escapism resonates so much with the current mood.

“I remember back in the 70s, I was only a young kid, but the electricity would go off for two days a week,” he said.

“Music was a way of escaping some of the hardships people had. People are going through bad times now, the news is awful, and they’re hankering after that return to something a bit more joyous, it’s a bit of an antidote.”