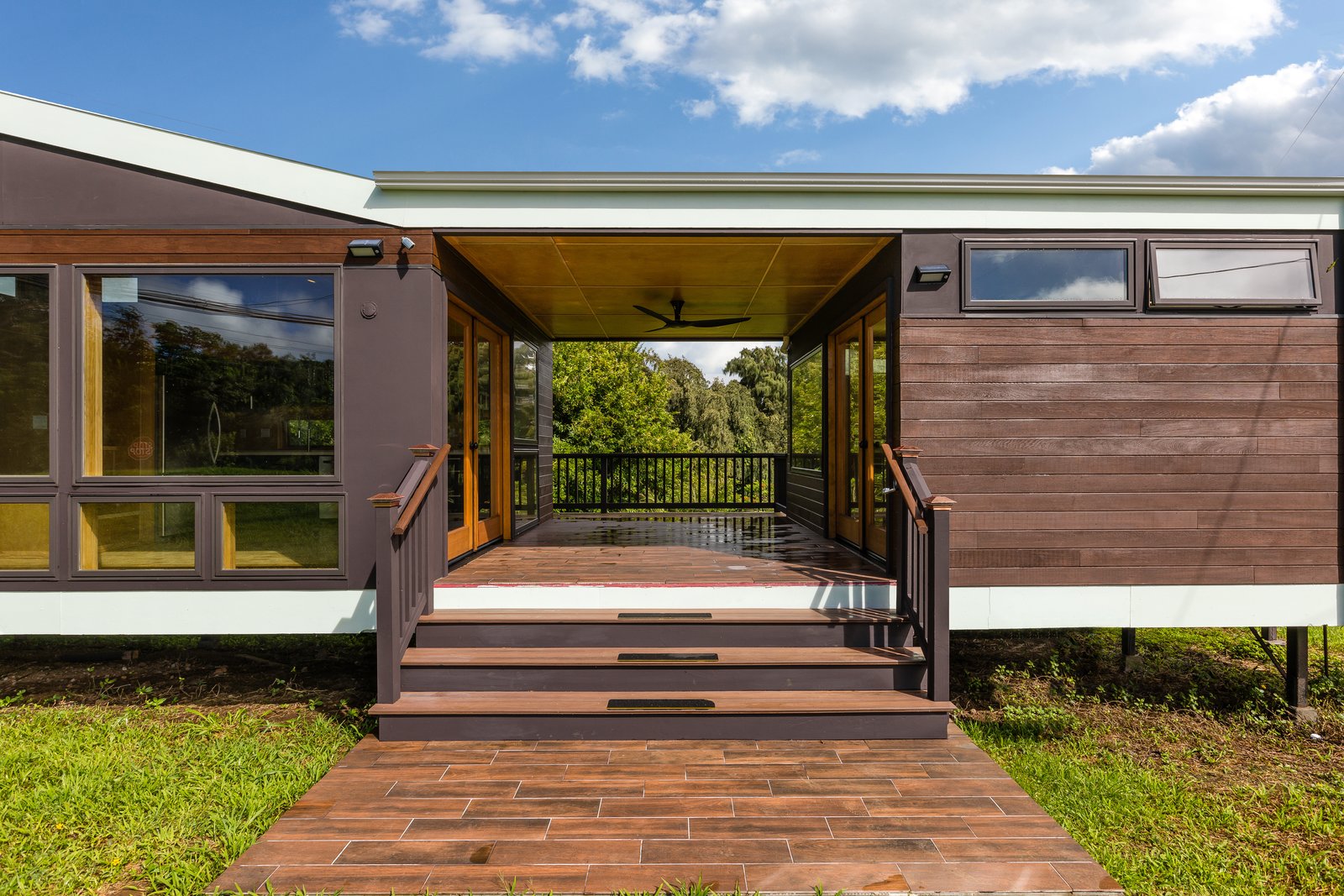 Once a prototype showcased at Dwell on Design, this Cali Solo modular structure by HMK Prefab Homes is now all about island living.

The current owners of this spec house didn’t know what would lie ahead when they purchased it at the 2014 Dwell on Design conference. They did, however, have a vision for the prospect of modular housing on Hawaii Island, more commonly known as the Big Island. After four years of permit approvals and a ride across the Pacific Ocean from California, the 640-square-foot house is finally ready to say "Aloha" to new owners. 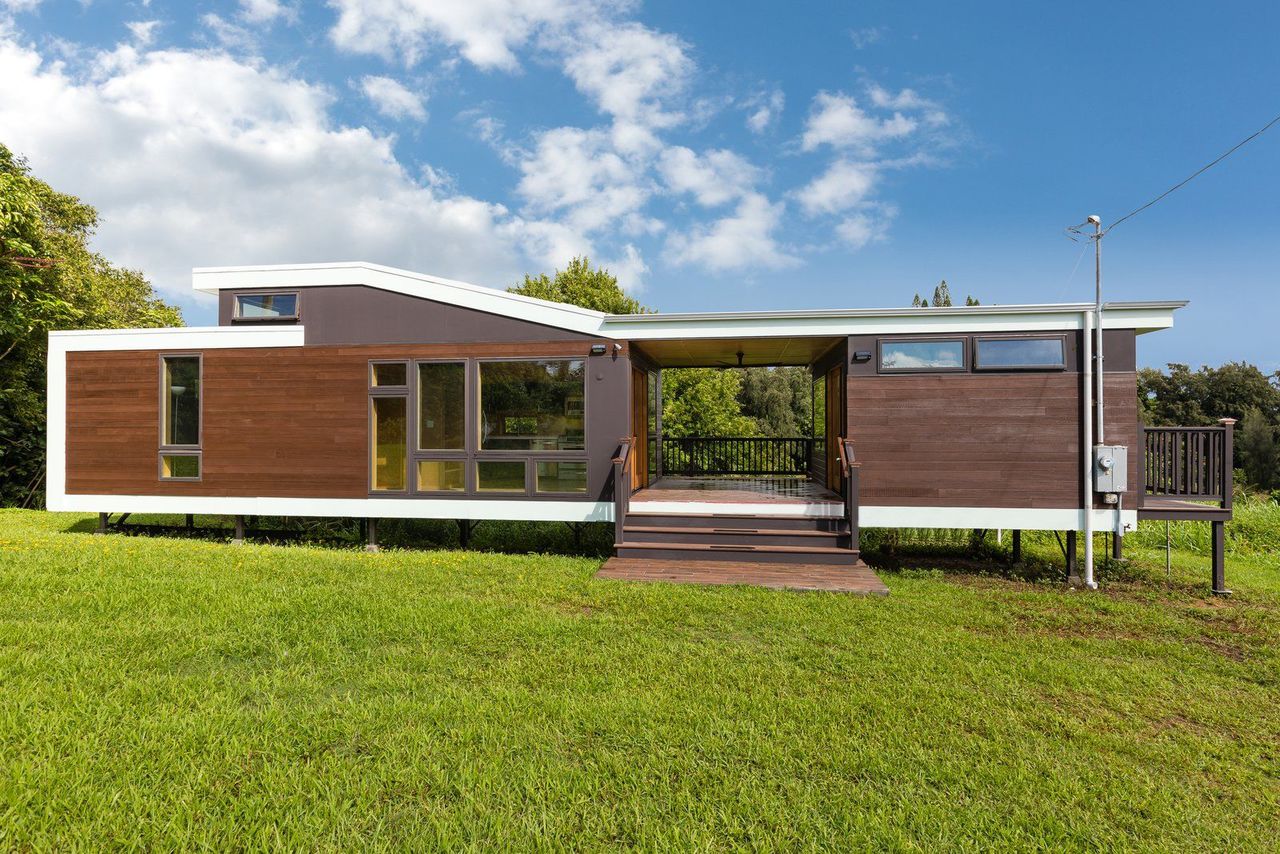 For three years, the 56-foot home was used as a trade show prototype for HMK Prefab Homes. The current owners purchased it at the 2014 Dwell on Design conference in Los Angeles.

It was quite a journey for this prefab. Immediately following the convention, the home was trucked to a port near San Diego, California, and then shipped by commercial boat to Honolulu, Hawaii. After some island hopping, including a stop on Maui, the structure finally landed in Hilo, the largest town on the western side of the Big Island, in late September 2014. 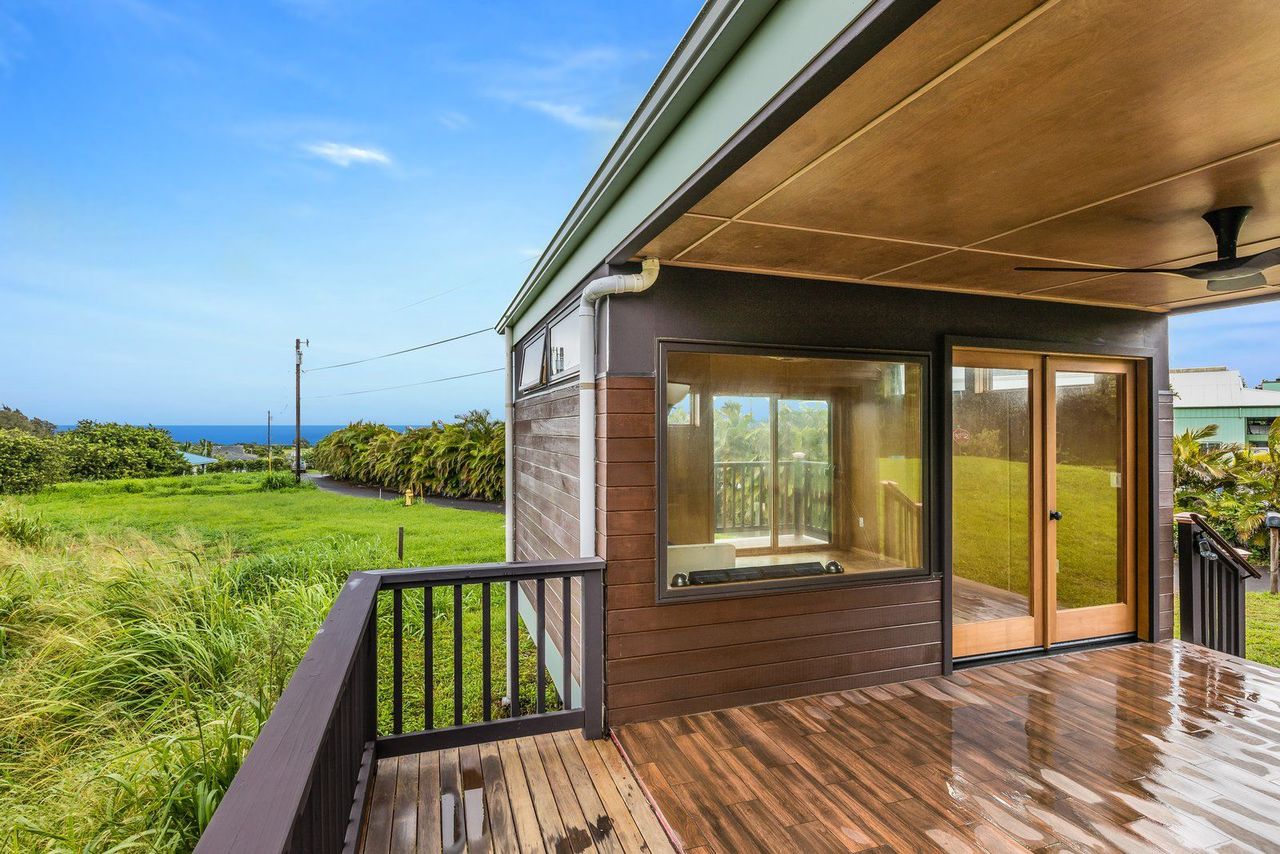 A covered lanai offers space for relaxing or entertaining in the tropical year-round climate.

The home is now settled about 75 miles west of Hilo in the eclectic community of Hāwī (pronounced "havi"). With two bedrooms and one bathroom, this island retreat is now looking for new owners. Scroll ahead to see more of the home, which is listed for $379,000. 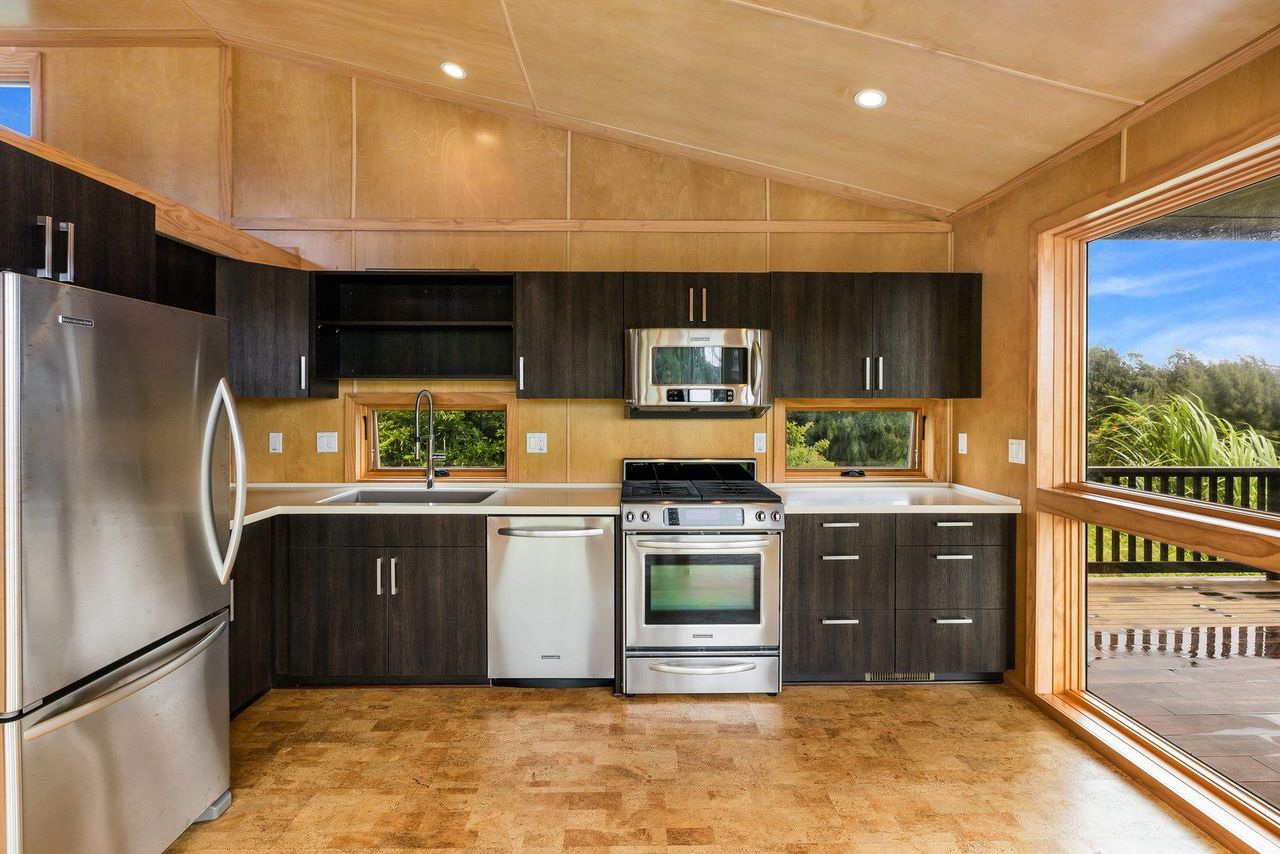 An open kitchen looks out onto the covered lanai. Slab cabinetry, solid surface countertops, and cork flooring provide a clean, modern look for the space. 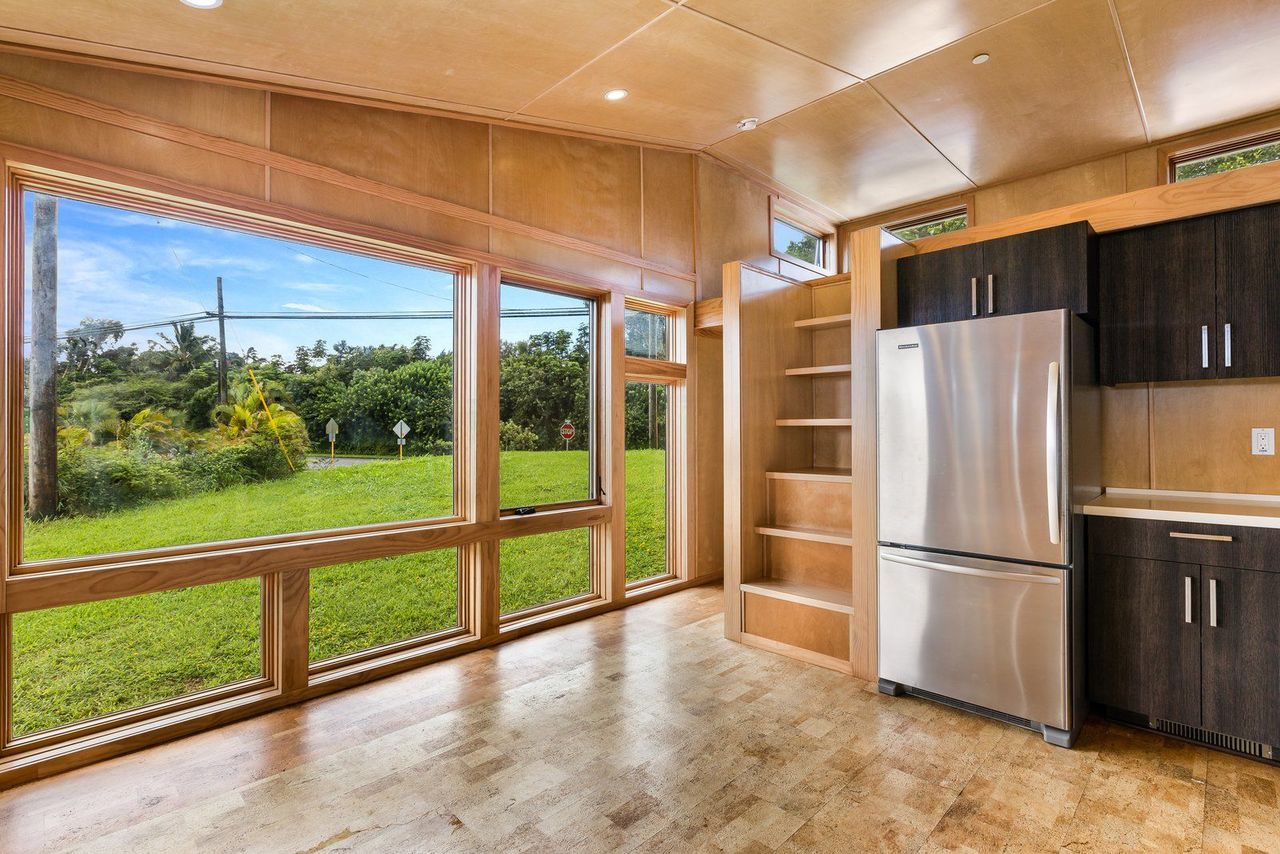 Large picture windows run along the exterior, providing natural light and views of the lush surroundings. Bookcase-style stairs lead up to a small loft, which offers an additional 135 square feet of living space. 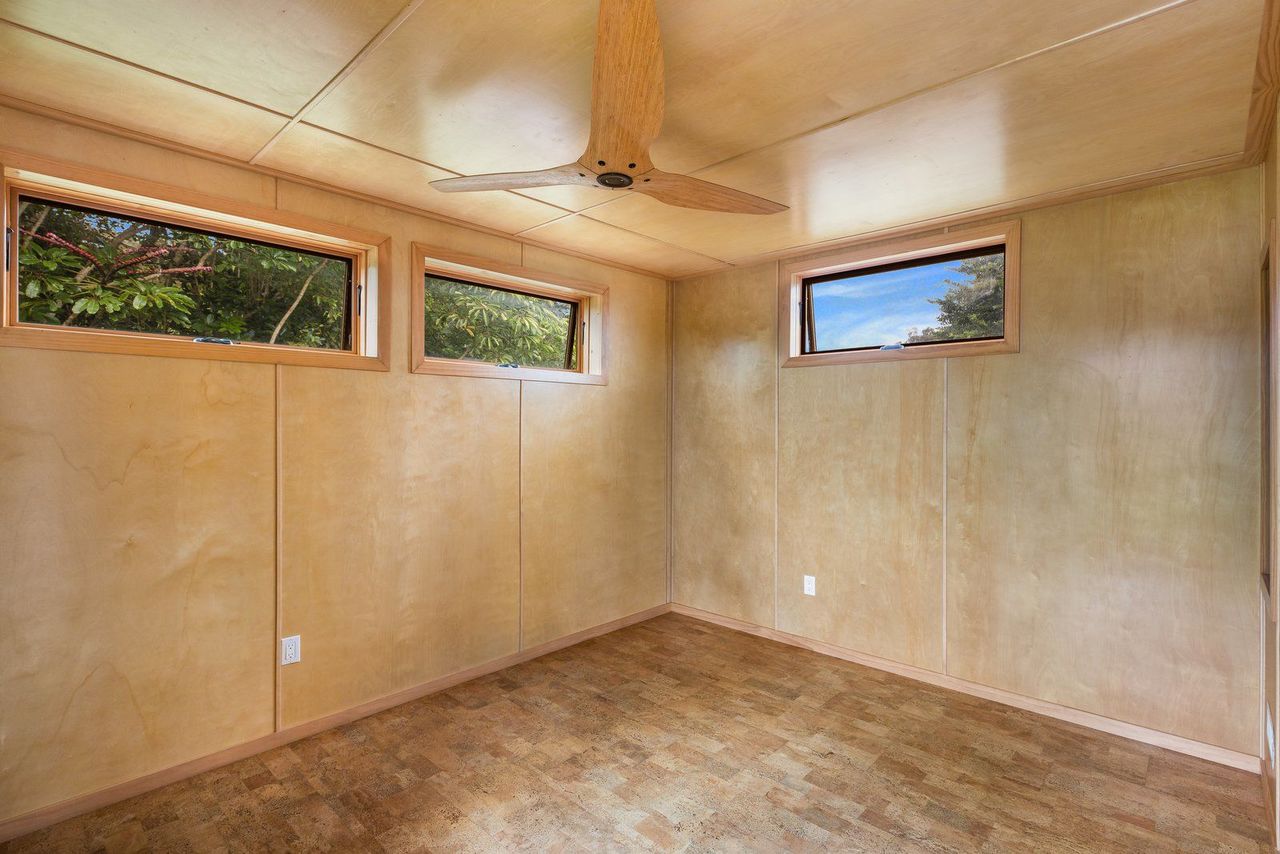 Down the hall from the kitchen is the home's master bedroom. Clerestory windows run along both sides of the room, which is completed in the same Baltic Birch plywood and cork flooring found throughout the rest of the home. 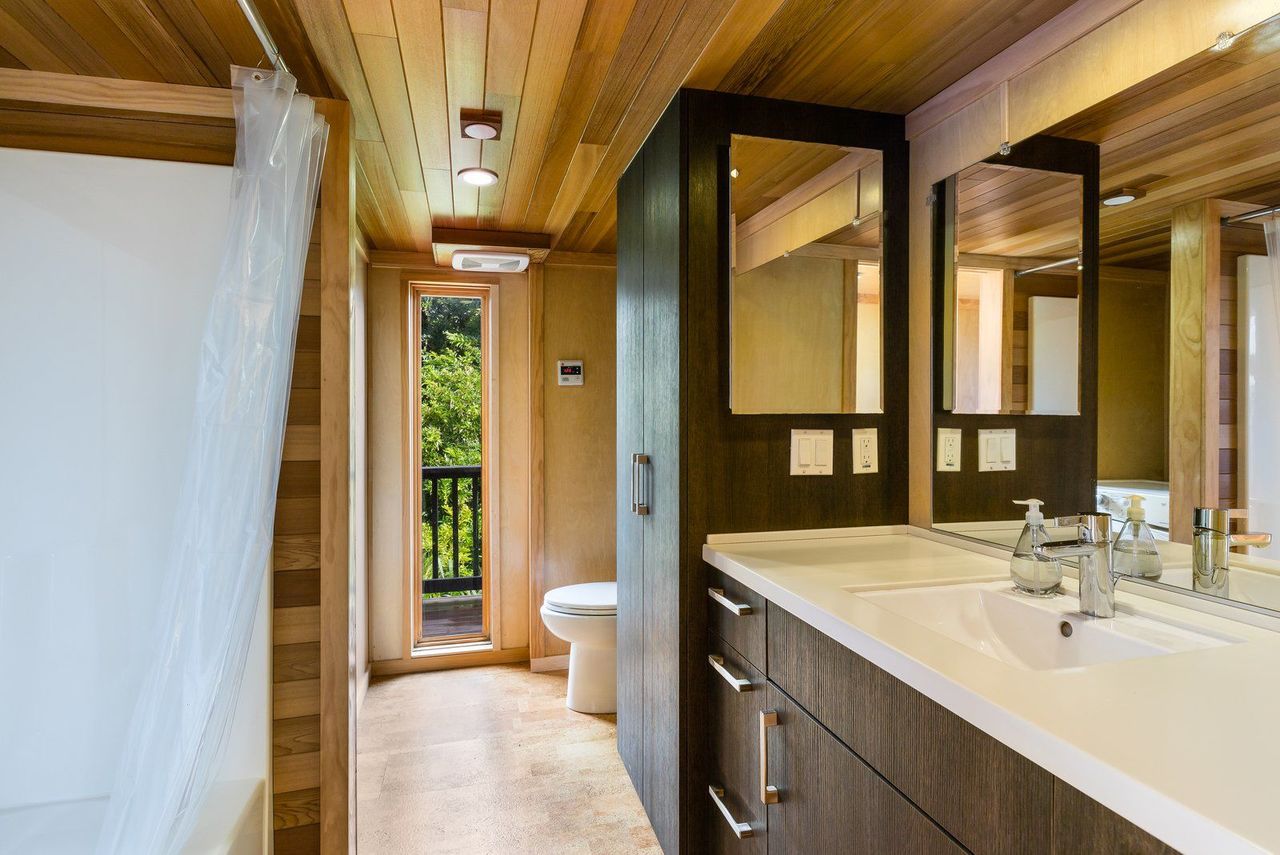 The full bathroom is adjacent to the master bedroom. A wooden ceiling accents the space, as does a large window that frames views of the natural landscaping. 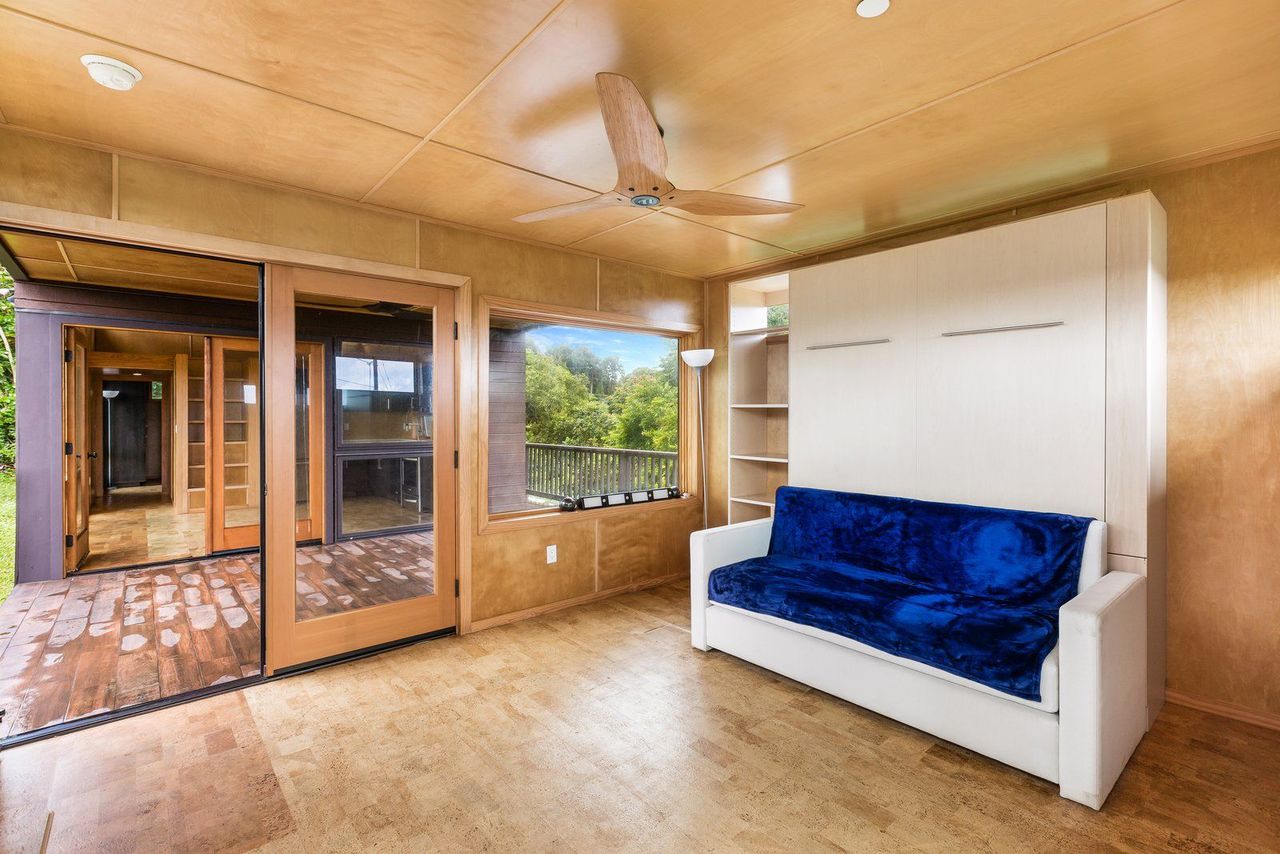 At the opposite end of the home, separated by the lanai, is the living space, which could also serve as a second bedroom. French doors and a large picture window create an easy connection with the outdoors.

A sliding door opens to a private balcony that faces the Pacific Ocean. Clerestory windows around the entire perimeter also brighten the space. 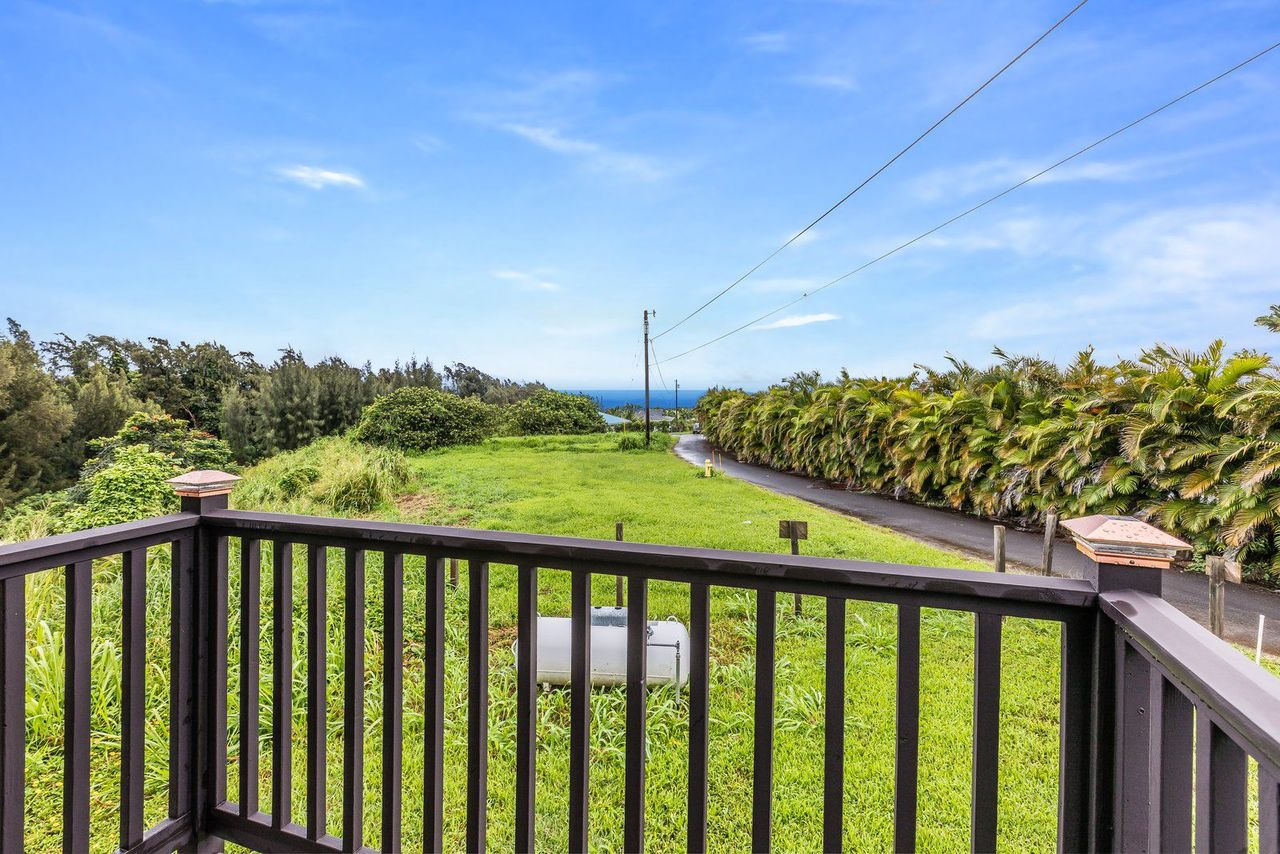 The view from the balcony, with the horizon in the distance. Lush plantings line the road that leads up to the one-acre property. 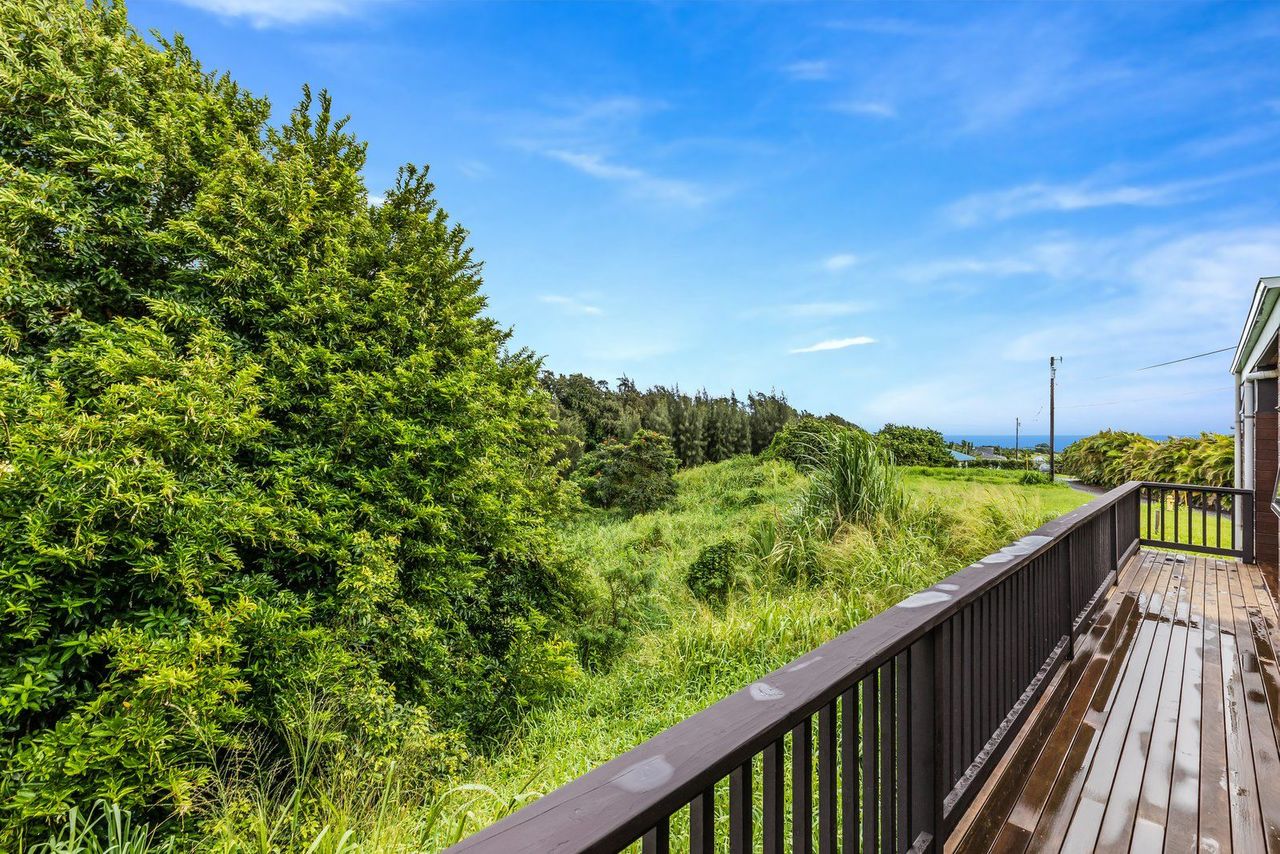 Native growth surrounds the land, which also has space for planting fruit trees or building a garden. The local Hawi Famers Market takes place just down the road each Saturday. 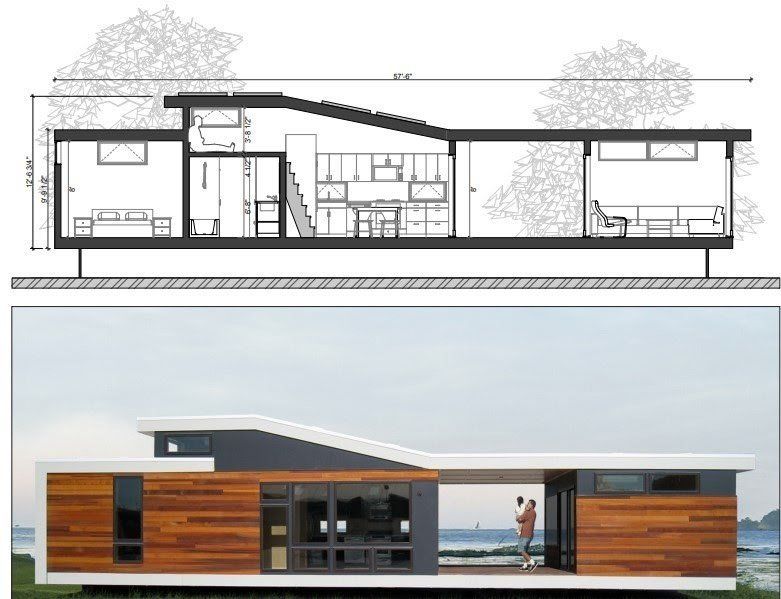 A 2012 rendering of the home. The structure was originally designed and built for a project that never materialized near Big Bear Lake in Southern California. 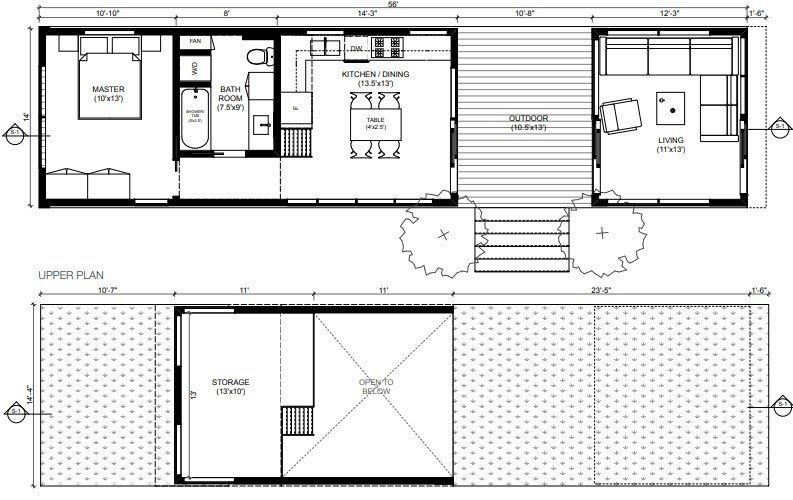 The floor plan of this 14 foot by 56 foot-wide modular home.