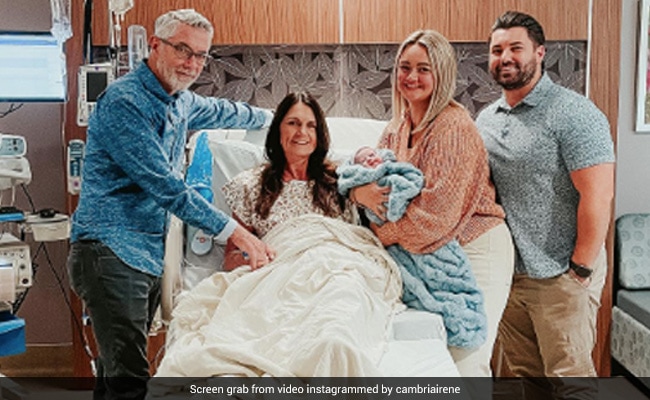 The grandmother offered to be a surrogate after the daughter-in-law had to undergo hysterectomy.

There are several stories of surrogacy on various social media platforms. In one such incident, a mother turned surrogate and gave birth to her son and daughter-in-law's baby in Utah, in the United States, according to a report in People. The husband-wife duo were not left many options after the wife had to undergo hysterectomy, a surgical operation to remove all or part of the uterus, the outlet further said.

When Jeff Hauck's 56-year-old mother Nancy Hauck offered the option to serve as surrogate to him and his wife Cambria, he did not take it as a possibility. However, it worked for the family and the 56-year-old gave birth to the couple's fifth child - a daughter, the outlet further reported.

Mr Hauck, who is a web developer, called the whole experience "a beautiful moment." "How many people get to watch their mom give birth?" he told People.

It is also reported that the 56-year-old was in labour for nine hours and called it  "a remarkable and spiritual experience" to share as a family. The People report said that Ms Nancy Hauck is facing new emotions of having a baby, but not bringing the baby home with her.

She told the outlet, "It is a mix of deep gratitude and some sadness from the separation."

As a tribute to the baby's grandmother, the little girl has been named Hannah. Mr Hauck added that his mother woke up in the middle of the night and heard a voice saying "My name is Hannah."

The grandmother, who works at the Utah Tech University, became confident the baby would be a girl, even without testing.

Cambira explained to People that "the name Nancy comes from Hannah. They both mean grace."

According to the outlet, Dr Russell Foulk said that although it is "unusual for a mother to carry her grandchild, age is really not the limiting factor." "Really, it goes to health, goes to the state of health of that individual," he explains.