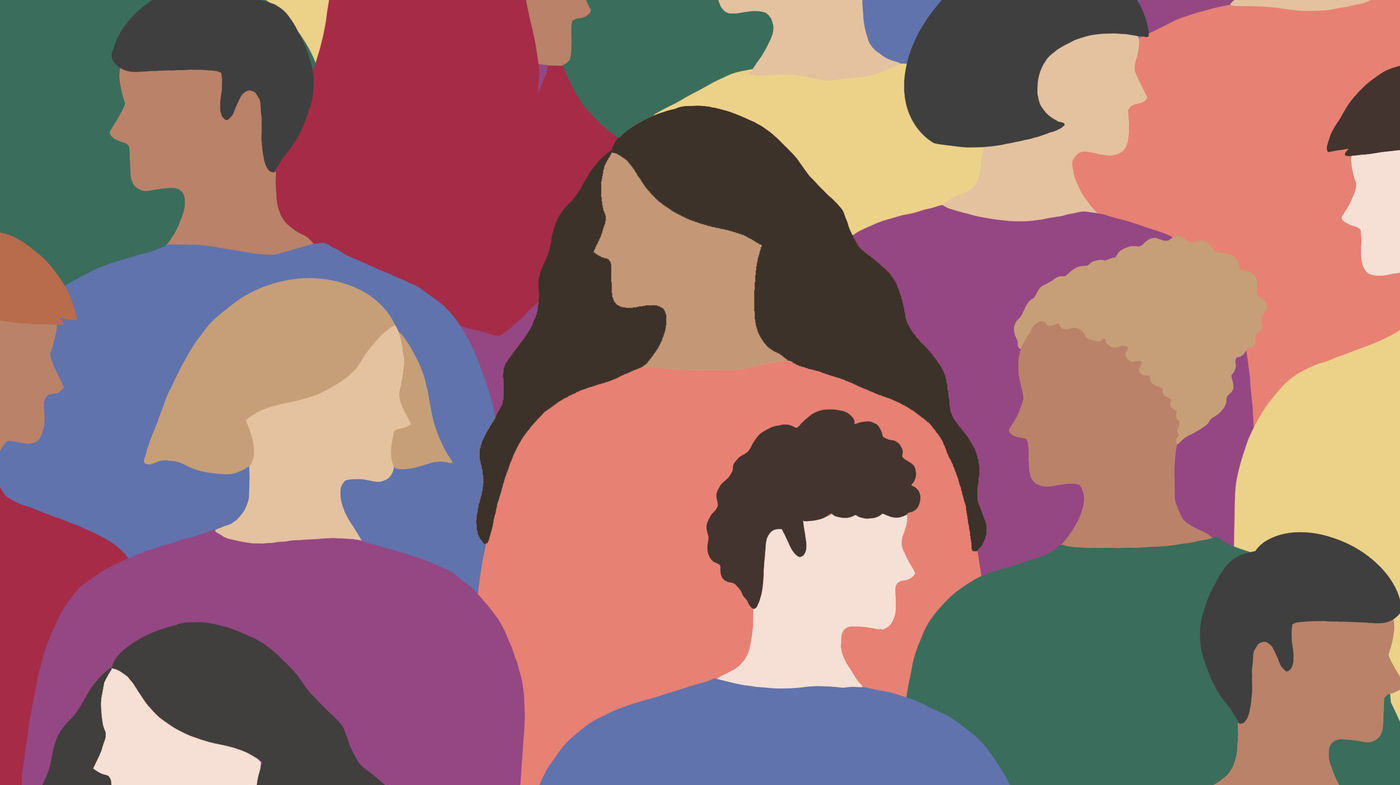 1 In 7 People Are 'Some Other Race' On The U.S. Census. That's A Big Data Problem

Growing numbers of Latinos turned a mysterious census category into the country's second-largest racial group. Researchers say that makes it harder to address racial inequities over the next decade.

For Leani García Torres, none of the boxes really fit.

In 2010, she answered U.S. census questions for the first time on her own as an adult. Is she of Hispanic, Latino, or Spanish origin? That was easy. She marked, "Yes, Puerto Rican."

But then came the stumper: What is her race?

"Whenever that question is posed, it does raise a little bit of anxiety," García Torres explains. "I actually remember calling my dad and saying, 'What race are you putting? I don't know what to put.' "

The categories the once-a-decade head count uses — "White," "Black" and "American Indian or Alaska Native," plus those for Asian and Pacific Islander groups — have never resonated with her.

"It's tricky," the Brooklyn, N.Y., resident by way of Tennessee says. "Both of my parents are from the island of Puerto Rico, and we're just historically pretty mixed. If you look at anyone in my family, you wouldn't really be able to guess a race. We just look vaguely tan, I would say."

In the end, for both the 2010 and 2020 counts, García Torres settled with checking off a box called "Some other race."

And last year, so did Frank Alvarez of Los Angeles, who says when people ask, he identifies as Guatemalan American.

"I just identify with my ethnicity. Growing up, we were in a very traditional Guatemalan home," says Alvarez, who adds he was disappointed not to see "Hispanic" or "Guatemalan" as an option for the race question. "I almost wanted to just skip that question, to be honest."

Nationwide, some 45 million Latinos were recorded as identifying with a mysterious alternative to what the federal government considers to be the major racial groups. They either marked the "Some other race" box or wrote in a response that the bureau sorted into that category. In recent decades, many immigrants have also come to see "Some other race" as their preferred check box, especially people with roots in the Middle East or North Africa (whom the U.S. government categorizes as "White") or from Afro-Caribbean groups.

Altogether totaling close to 50 million — or more than 1 in 7 people living in the U.S. — their numbers helped the catchall category rise through the ranks of census results.

What was once the country's third-largest racial category in 2000 and 2010 outpaced "Black" last year to become the second-largest after "White" — and a major data problem that could hinder progress towards racial equity over the next 10 years.

When the Census Bureau first used an "Other" race option in 1910 for the national tally, it wasn't meant to generate large numbers.

Census workers — who used to assign people their race by observation — were instructed to note those who didn't fall within the provided categories with a shorthand "Ot" on forms and spell out their race. According to one of the bureau's 1910 census reports, that ultimately produced a count of "5,012 Koreans, 3,249 Filipinos, 2,545 Hindus, and a scattering representation of other races."

When the bureau started allowing all U.S. residents to self-report their racial identities in 1960, the forms that households used asked people to write in their answers and suggested a list of groups that ended with "(etc.)"

By 2000, a check box for "Some other race" made its first appearance, and it was almost its last. The bureau had proposed to remove it from the 2010 census form because it had become "a source of noncomparability" between census information and survey data from other government agencies that don't use a "Some other race" category. Getting rid of it, bureau officials had hoped, could help more Latinx people answer the census race question.

"For a long time, there was the sense that there wasn't anything wrong with the question, but rather that Hispanics didn't understand the question. And I remember thinking, 'Wow,' " says Clara Rodriguez, a sociologist at Fordham University and author of Changing Race: Latinos, the Census, and the History of Ethnicity in the United States. "'Some other race' was something to be taken seriously, not to be dismissed as a misunderstanding on the part of the Hispanic population."

In 2004, a congressional mandate requiring the census to include a "Some other race" category was introduced by then-Rep. José Serrano of New York, who was the top Democrat on the House appropriations subcommittee that funds the bureau. The move was championed by Latino civil rights groups concerned that removing the option would lead to inaccurate counts of other racial categories that are used to redraw voting districts and enforce antidiscrimination laws.

"This will ensure that Americans are not forced to racially self-identify in a way they are uncomfortable with," Serrano said in a press release that noted support from the Mexican American Legal Defense and Education Fund, "and will produce census results that better reflect the realities of race in America today."

Part of that reality, however, is that a growing "Some other race" population remains a "huge data problem," says G. Cristina Mora, a sociologist at the University of California, Berkeley who studies how race and ethnicity are categorized and is concerned about how that category obscures the racial identities of many Latinx people.

"This is a red flag. It's been a red flag that's been around for a very long time," adds Mora, the author of Making Hispanics: How Activists, Bureaucrats, and Media Constructed a New American. "If we're not represented in the data, we're never going to have a true sense of racial justice."

And the implications touch almost every aspect of people's lives, including their health, explains Luisa Borrell, a professor of epidemiology and biostatistics at the City University of New York's Graduate School of Public Health and Health Policy.

"We cannot really identify who those people are," Borrell says of the "Some other race" population. "That's going to be a group that is going to be left out when it comes to tabulations for mortality, for any health outcome."


The Trump administration stalled on approving a solution


The Census Bureau had come up with a solution for the 2020 count.

After years of research leading up to last year's count, the bureau proposed combining the separate questions about Hispanic or Latino origins and race into one.

And under that combined question, the list of check boxes would include "Hispanic, Latino, or Spanish" (as well as "Middle Eastern or North African," or MENA) among the major racial groups designated by the White House's Office of Management and Budget, which sets the standards for how the bureau and other federal agencies collect data on race and ethnicity.

But what the bureau concluded was the "optimal" way of collecting data required approval by OMB. When asking people to self-identify, OMB currently requires a question about Hispanic or Latino identity, which OMB considers an ethnicity and not a race, to be asked before a question about a person's racial identity.

During former President Donald Trump's administration, OMB made no public decision on proposed changes to its standards.

"At the end of the day, the No. 1 faction that was against the combined question was the Trump administration," Mora says.

Asked by NPR how concerned the bureau is now that "Some other race" is the country's second-largest racial category, Nicholas Jones, the bureau's director and senior adviser of race and ethnic research and outreach, said they're "not surprised by the findings."

"While the Census Bureau tested an alternative question design in 2015, we must ultimately follow the 1997 OMB standards and use two separate questions to collect data on race and on ethnicity," Jones pointed out during a press conference in August. "Our testing, however, did show that we could make improvements to the 2020 census race and ethnicity questions within the OMB guidelines."

There could be changes in time for the 2030 census

As the bureau ramps up its planning for the 2030 census, some researchers are calling for the federal government to consider adding a different kind of race question, including Nancy López, a sociologist at the University of New Mexico whose research has focused on people's "street race," or what they think strangers assume their race to be.

"Not every Latino is a brown-skinned Latino. There are white Latinos, there are Black Latinos like myself, and there are Latinos who are also street-race Asian," says López, who adds she's concerned about the limitations of data about how people self-identify. "What would be the civil-rights use of that data when we recognize that most people are being racialized by others when they seek housing or vote or seek employment?"

OMB's current standards note that "self-identification is the preferred means of obtaining information about an individual's race and ethnicity, except in instances where observer identification is more practical."

For the bureau's research on race and ethnicity leading up to the 2020 census, it says in a statement to NPR that while it did ask some participants about how they were perceived by others, the data is "not suitable for release" given that it was "for exploratory research purposes."

Whatever questions end up on the 2030 census forms, Julissa Arce of Los Angeles says her one hope is to see a "Latino" category under a race question.

Last year, instead of marking "White" as she used to on forms that asked for her racial identity, Arce, an immigrant from Mexico, says she selected "American Indian or Alaska Native," "Chinese" and "Some other race."

"It's important to be able to click a box that says who we are, instead of what we're not," says Arce, author of the upcoming book You Sound Like a White Girl: The Case for Rejecting Assimilation. "We've been here since before it was called the United States. And I think we deserve to be accurately represented."