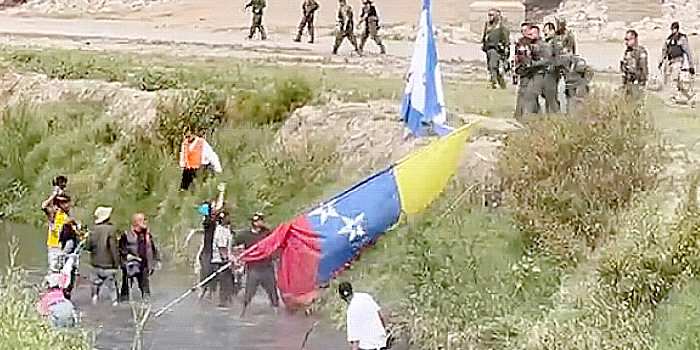 On Wednesday night, nearly 1,000 mostly Venezuelan illegal immigrants surged across the border into El Paso after hearing about the end of Title 42, according to Breitbart’s source within the U.S. Customs and Border Protection [CBP].
Right now, more than 900 illegals are currently being held in Border Patrol processing facilities, the source said.

The person who is not authorized to speak to the media told Breitbart that Venezuelans started to cross the border as soon as they heard about a U.S. District Court ruling that ended the practice of expelling certain migrants under the CDC authority.

Even though the ruling ordered the Biden administration to abandon the practice, the same judge amended his Tuesday order on Wednesday, granting the government’s request for a stay until Dec. 21, 2022.

“The source says the fate of the more than 900 migrants is not known as the current agreement with Mexico to receive the Venezuelan migrants under Title 42 is capped at 200 per day locally,” Breitbart reported.

“… the agreement allows for the return of up to 1,000 Venezuelan migrants at five specific locations across the southern border, including El Paso. The source believes many in the group will achieve their goal of release.”

The devastating consequences at the southern border are possible because of the discontinuance of the use of Title 42 since other policies and legal mechanisms to quickly remove illegal immigrants from the country are no longer available.

Illegals have been crossing the border in recent months, which resulted in the El Paso Sector taking the top spot for border crossings in October.

“The sector jumped ahead of the Rio Grande Valley and Del Rio Sectors with approximately 53,000 migrant arrests during the month, up from 14,000 in October 2021.”

Right now, the City of El Paso awaits a $6 million reimbursement from FEMA for expenses to provide shelter, food and transportation to the people who illegally cross the border of the United States.

If Mexico does not agree to the return of the illegal immigrants, local non-government shelters and a county government migrant facility will be left to care for many of the migrants that were arrested on Wednesday night, according to the source.